A PLACE OF HISTORY, ART AND PRAYER

The Church of the Hôtel-Dieu de Québec monastery was built between 1800 and 1803, thanks to the generosity of craftsmen and materials recovered from torn-down buildings, including the Palais de l'Intendant. Pierre Émond (1738-1808), master woodworker and sculptor, led the construction work. The current appearance of the façade is the result of modifications made by the architect Thomas Baillairgé (1791-1859) in 1839. The bell tower that had crowned the monastery from 1756 was placed on the pinnacle of the sacristy in 1810, and then at the top of the façade in 1931.

At the instigation of the Vicar General, Jérôme Demers (1774-1853), the Augustinian Sisters asked Thomas Baillairgé to redesign the interior of the church. In 1829, he developed plans for a new decor that included, among other things, the false vault and the altarpieces of the choir and the chapels. Completed in 1832, this is one of the rare decors where Baillargé himself worked as a sculptor. In 1833-1834, Baillairgé also crafted the tabernacle of the main altar that rests on the roman-style tomb made in 1803 by one of the sculptors of l'atelier des Écores. The side altars were designed by Baillergé and crafted between 1845 and 1850 by one of his students, Raphaël Giroux (1815-1869).

The Church of the Augustine Sisters of l'Hôtel-Dieu-de-Québec was classified as cultural heritage in 1961, along with 33 of its moveable goods.

SIDE ALTAR ON THE RIGHT SIDE ALTAR ON THE LEFT Altar of the Virgin Mary: Raphaël Giroux (1815-1869), sculptor and architect, (1846)
Sculpture: Notre-Dame de Toutes-Grâces, (Our Lady of All Graces) received after sailors made a vow and were saved from shipwreck. (1738) [2]
Painting above the altar: François-Guillaume Ménageot (1744-1816), painter, Vision de Ste-Thérèse, (Vision of Saint Theresa) recovered after the French revolution (1785) 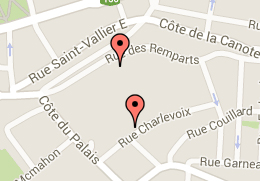