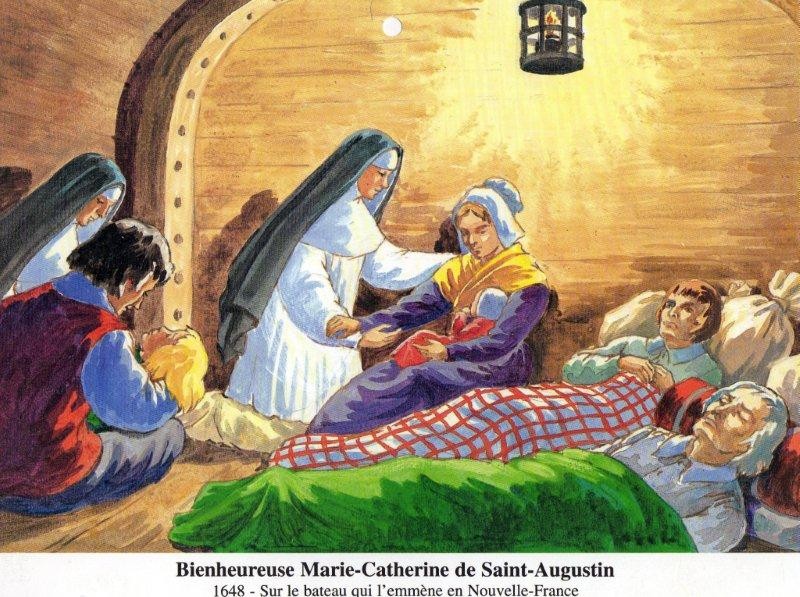 The Cardinal departed on the 31st of May, 1648 from the port of La Rochelle in the region of Normandy and headed towards the colony in New France. The ship was bringing over a treasure from the Monastery of Bayeux.  This precious resource has been a remarkable gain for our country. By her charity, courage and unyielding strength, Blessed Marie-Catherine de Saint-Augustin became a prominent figure in the Augustinian community and amid the founders of the Canadian Catholic Church. Her voyage across the Atlantic faced her many difficulties and sufferings. The ships lacked basic hygiene and necessities such as clean water and refrigeration for food.  The unsanitary conditions and the proximity between passengers caused an epidemic of the plague. Catherine, like many others, contracted this disease and thought that her death was imminent. One day, in prayer, Catherine received a vision of the Virgin Mary. In this visit, the Mother of God healed our blessed sister assuring her that she was still needed in this life. Catherine contributed immensely in the development of the colony and in the implantation of our faith here in Canada. By her life of devotion to the sick, the poor and the lost souls, blessed Marie-Catherine of Saint-Augustin is a true witness to God’s mercy for all peoples. Her arrival in the country was a joy and still is to this day, in remembrance for all she did in her service.